Wild symbols will appear above 2 or more consecutive reels starting from reel 2. 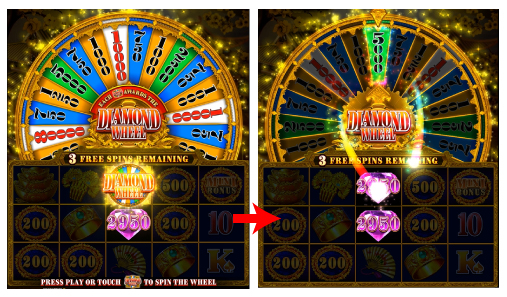 Bonus Wheel Feature is triggered when all 15 positions are filled with gems during the Diamond Spin Feature. A wheel with Diamond symbols, Major and Grand Jackpots will spin to award an additional bonus.

Triggered by Scatter symbol appearing on reels 1, 2 and 3. During the Free Games, prizes on all appearing on the gem symbols are accumulated to a Diamond meter shown on the reels. When there are no free games remaining, the Diamond Spin Feature will start with the initial Diamond displaying the prizes collected on the meter.